Trekking in the Lofoten islands

In August, I went trekking on the superb Lofoten islands with a good friend. As it was quite difficult to plan a relatively long trekking itinerary, I am writing this blog post to share it. The itinerary is designed to trek for at least 5 days and I suggest extensions to reach 9 days (we actually did 8 days). You should consider taking extra security days in case of bad weather that would slow you down.

You should consider our itinerary if:

These reasons rapidly convinced me to focus our trip on the Moskenesøya island at the southern end of the Lofoten archipelago. The idea is to take the bus from Moskenes and come back to Moskenes by foot.

Also, if you want to avoid tourists as much as possible, try to go there after the high season like us, i.e. after the ~15th of August, when the Norwegian children start class again.

We had good weather without a single cloud for 10 days but this was really extraordinary. Be ready to have rain, mist and cold weather in August. You should carry a full set of waterproof clothes with you. Don’t forget your swim-suit. Bring semi-high or high hiking boots as there are fens at several places.

We packed food for around 8-9 days but it is actually possible to re-supply in very expensive shops after 5-6 days. You can find a lot of different berries at the end of August, check this website to see which ones are eatable. There are also mushrooms, I ate a few chanterelles, the only species I allowed myself to eat. Be extremely careful with mushrooms, you can find pictures of poisonous and eatable mushrooms on this website.

Water is very abundant on the Lofoten, there are many streams and lakes, so you should not worry too much about it. We used pills to purify it but I really don’t think that it was necessary.

I recommend using a GPS (I used my phone with extra batteries with the Gaia GPS app) as some trails can be hard to find. Alternatively there are also available 1:50000 topographic maps.

The best topographic maps of Norway can be found on this website. These maps are actually available on the Gaia GPS app for Android. We also recommend the excellent website rando-Lofoten with many GPS tracks of hikes. It greatly helped us to design this itinerary.

Most of the trails at the end of August are quite well-marked as many hikers already took them during the summer. For the same reason, they can be quite marshy sometimes.

We flew from Paris to Oslo and then took a SAS flight to Bodø, a small city on the continent, in front of the Lofoten islands. We arrived there in the evening. You have to buy camping gas in Bodø as there are no easy/cheap options later in our itinerary. In Bodø you can find gas in oil stations or in one of the many outdoor stores. To reach Moskenesøya from Bodø, you have to take the ferry to Moskenes which is a small town on the Moskenesøya island. The timetables of the ferry can be found there, be sure to check the dates. We took the midnight ferry and arrived around 4 a.m. at Moskenes. This ferry does not have many passengers, only a few adventurous backpackers. The sunrise with the Lofoten in the background is unforgettable. 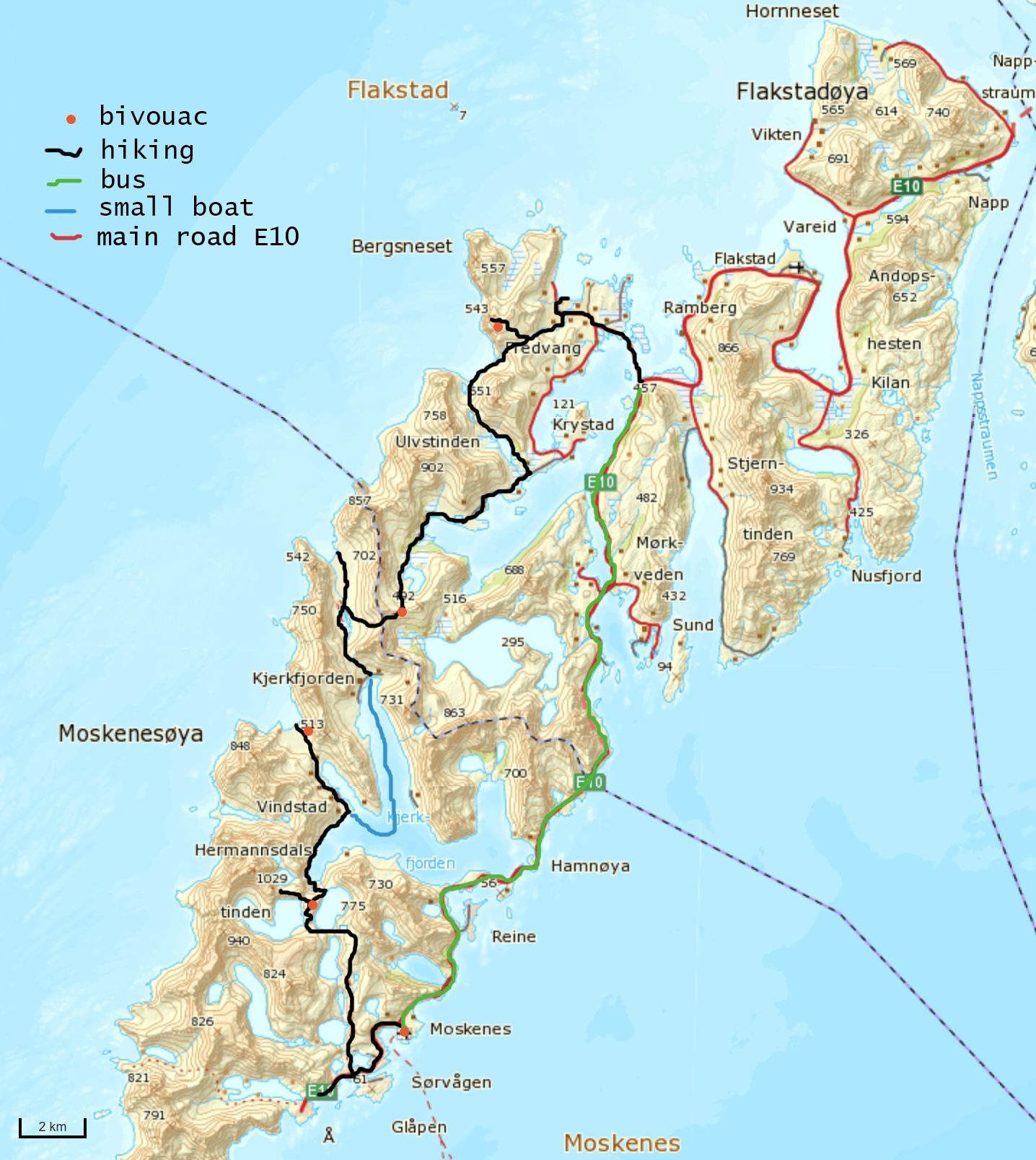 Map of the 5-day itinerary.

If you arrive at 4 a.m. like us, you might still be a bit sleepy. We actually set up our tent on a grass field near a campground a few minutes away from the harbor and slept there a few hours until the first bus arrived. In the morning, as we were waiting at the bus stop, we actually realized that the very best sleeping option in Moskenes is to sleep in the waiting room of the ferry harbor! It is heated, there are toilets and during the night there is absolutely no one! We actually slept there two nights later during the trip. The waiting room is on the right when you land, just behind the bus stop.

Taking the ferry at 1am was actually quite fun.

So the first part of the day is to reach Fredvang, the starting point of the trek. Take the bus from the Moskenes Ferry stop to Fredvang X (or Napp if you want to add two days to the itinerary as we explain later). The timetable of the bus can be found here. Be careful, timetables are different during the weekdays and the weekend. For us, the first bus was at 7 am during the weekdays and 9 a.m. during the weekend. The bus from Moskenes to Fredvang X takes around 40 minutes, you can pay in cash inside the bus and there is a nice student discount (I paid 40 kr). The bus passes through Reine, a scenic town on a small portion of land between steep mountains and the sea.

We arrived around 10 am at Fredvang X. From there we crossed the two bridges to go to Fredvang. We saw a dolphin from one of the bridge. In Fredvang, we recommend to go (and swwim) to the beach, which is empty and has a very nice background.

View from the bridge

After having lunch on the beach, we headed towards the Ryten, a 543m peak. At some point the path forks in two: one path heads to the Ryten, the other to the Kvalvika beach. We took some water in a small lake at the intersection of the two paths and started climbing the Ryten. We reached the summit around 5 pm. From there, the view on the Kvalvika beach is breathtaking and we spent a few hours wandering in the area until a colourful sunset.

As the summit was very windy, we decided to set up our tent a bit before the summit, where the view of the beach is the best. Thick moss provided us with an excellent mattress.

We hiked down the summit to the beach, crossed it, passed a small lake, a second one in which I took a quick bath and we arrived at a road that we walked down to arrive to Selfjord. From there, we started our journey to the Horseid beach. The ground at the beginning is a bit marshy and you ‘d better have high boots. We found there our first cloudberries and bilberries. At some point, we reached a lake surrounded by mountains. We were actually planning to sleep there but the mosquitoes and black flies (only place we have actually been bothered by bugs) convinced us to climb to the first pass towards Horseid beach. Up there, no more bugs, a perfect grass spot to set up the tent and an astonishing panoramic view. This was for sure one of the best spot I have ever camped on. 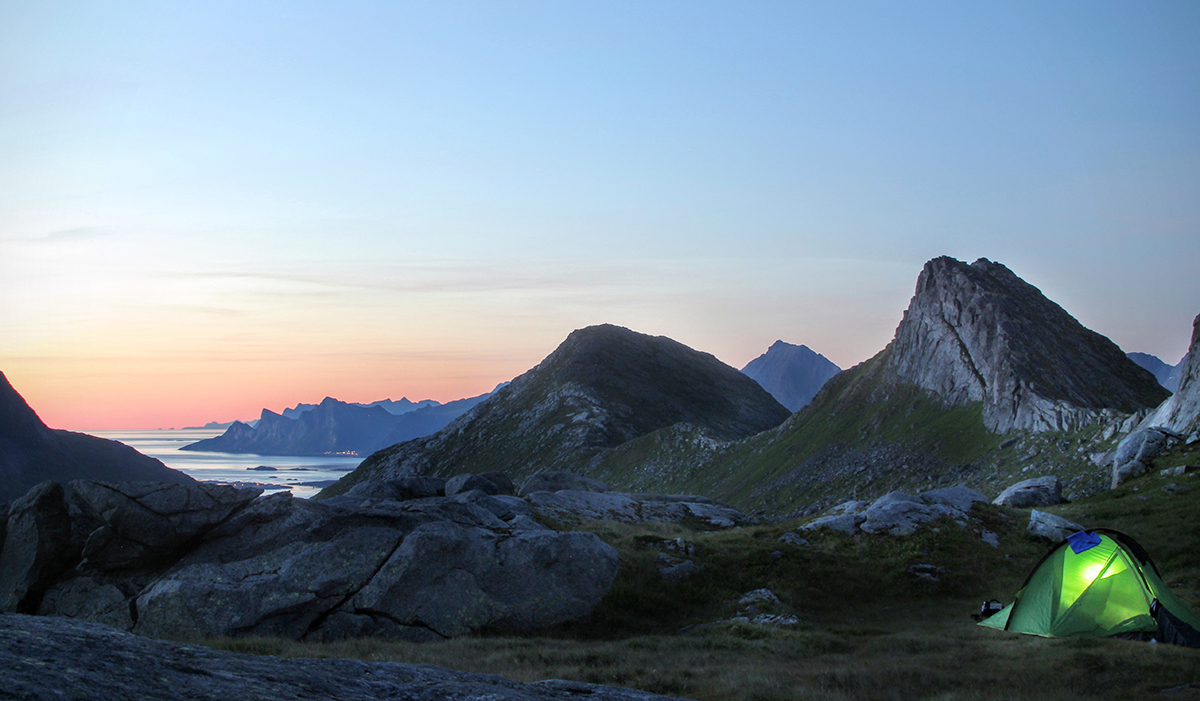 Climbing the pass to set up our bivouac was an excellent idea.

After a fantastic night, we crossed another pass and reached a valley heading to the secluded Horseid beach. It is the least visited beach of the Lofoten because it is the most difficult to reach. As a result it was completely wild and we had this huge beach for us alone. We had lunch there and then headed to Kirkefjord to get a boat at 3pm. Be sure to check in advance the timetable, which depends on the season. Kirkefjord is actually a nice small village, only reachable by boat. We took the boat to Vindstad and walked down to the Bunes beach. There, it is touristic, it does not take long to realize it: the inhabitants of Vindstad don’t smile to you and the beach is not wild anymore. We camped on the beach with maybe 10 other tents, which is not so terrible because the beach is really huge. For nature purists, I would actually advise to skip Bunes beach. It has been spoiled by irresponsible tourists and if you are like me who can not stand seeing trash in nature, then you will feel angry.

The first part of the day was to go from Vindstad to Forsfjorden. It should be possible to do this step by boat but we decided to hike there. This was actually a bad idea as it was very difficult (difficulty is increasing). There is a kind of trail at the end of August but sometimes it disappears and a few parts are particularly dangerous. I would advise against hiking this portion, take the boat instead. It took us 2-3 hours to reach the hydraulic plant of Forsfjorden, whereas it would only take 5 minutes to go there by boat. At the plant, we climbed a steep cliff to reach a lake in the mountains. We had lunch there and I went in the water. This was probably one of the coldest bath I ever had ; snow was actually still melting there. Then we climbed a hill to reach a small plateau, which is usually the starting point to climb the Hermanndalstinden, the highest peak of the island (1029m). So we decided to set up our base camp here.

View from the hill on which we set up our tent

I decided to attempt the climb but I finally stop around 750 meters high as some portions were particularly exposed and windy, some parts even collapsed and I was already tired after a long day of hiking.

From our hill we hiked down to another lake and then reached the Munkebu hut. From there we headed to Sørvågen. This part is actually very popular and we came across many tourists going there for a day hike. From Sørvågen, we went to Å and then came back to Moskenes. We had in mind to take the ferry to Værøy but we actually arrived 5 minutes late and missed the ferry. The next one was 48 hours later… We decided to sleep in the waiting room of the ferry, which appears to be a great sleeping option in Moskenes!

If we had caught the ferry on time, we would have spent two days on Værøy, an island 70 minutes south of Moskenesøya. It is supposed to be quite authentic with only few tourists. There is an abandoned town in the south of the island, called Mostad, where would have liked to camp. The island is also famous for its colony of puffins.

To add 2 more days to the above itinerary, you can also start your trek not in Fredvang but in Napp, in the very east of the Flakstadøya island. For that, instead of taking the bus from Moskenes to Fredvang X, continue further and stop at Napp. 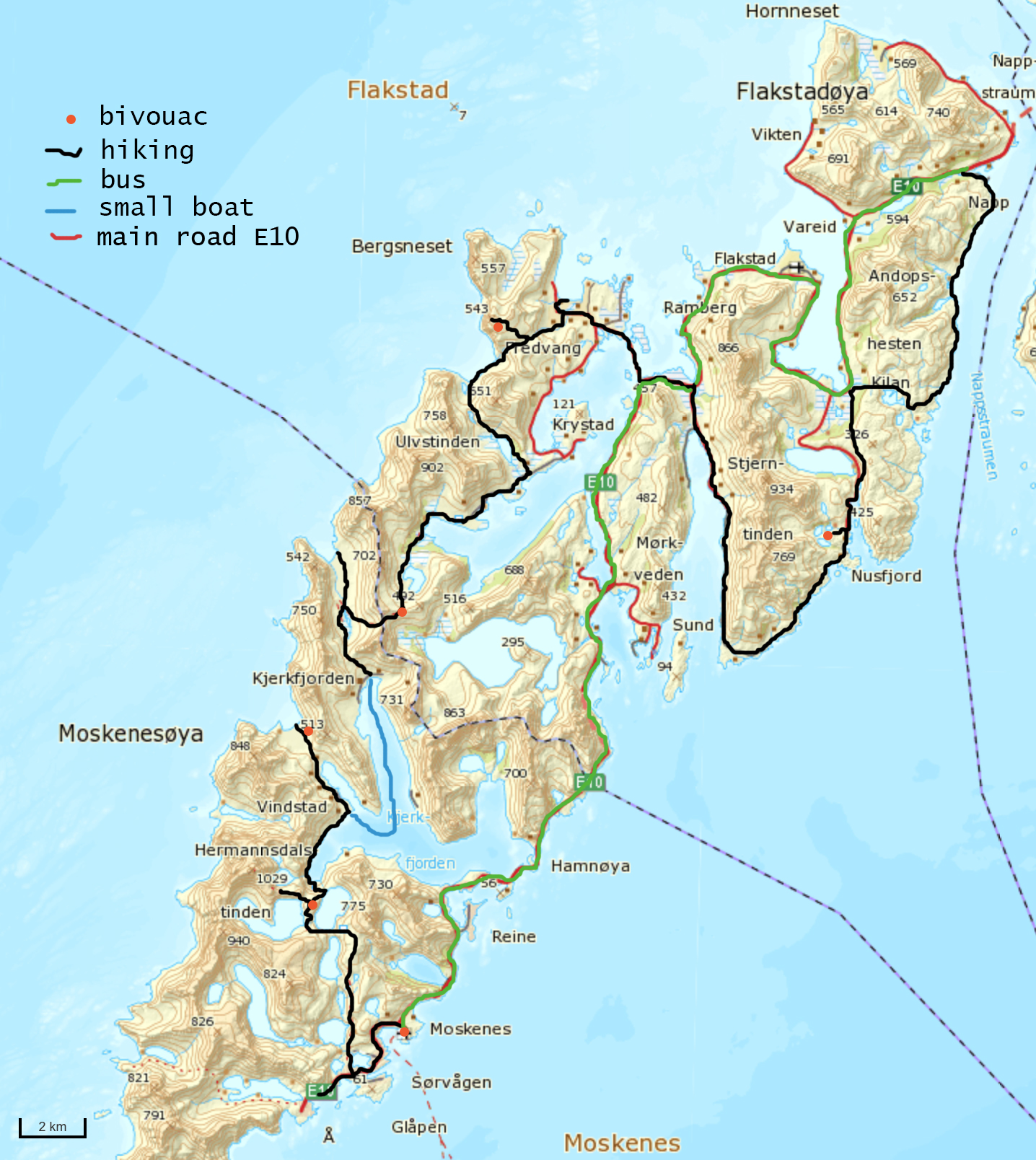 From Napp, you just have to follow the cost, one short portion is actually very steep and difficult but the rest is easy. At some point, you will deviate from the cost and cross a very nice part of the island with lakes. We saw there a sea eagle. Then you will reach crops and start heading to Nusfjord. At some point you will have to walk on the road until reaching the village. This was our longest day of hike, with nearly 10 hours without meeting any other hiker.

Nusfjord was a nice little fishermen village (a touristic village now) with a small store where you can buy (expensive) food. After asking the locals, we found an ideal spot to set up our tent in front of a lake with majestic mountains in the background. The exact location can be seen on the following satellite image:

The next day, we walked from Nusfjord to the village of Nesland and then walked along a small road towards the North. From there you can decide to go to Fredvang, sleep there and the next day start the 5-day itinerary explained above.